Since day one, people have been requesting an aero package for the Drakan. We finally had some time to work on this project and we think the result is pretty awesome.  Naturally the wings needed to work and look good.  Ensuring that they were safe and offered proper aero balance to the car was critical to us.  The best way to do this was to go to the track with our driver and test.


We decided to use a standard top mounted straight wing up front with F1 style mounts. The rear wing is a top mounted style as well, the lower surface of the wing is the most important for generating downforce so moving the mounts to the top and using a "swan neck" mounting solution is theoretically the most efficient. However, due to our car having a wind shield and roll hoops in the way, the effectiveness of the center portion of the rear wing is likely a bit diminished anyway. We chose this style anyway since frankly it just looks so good.  Due to the windshield, we raised the rear wing as high as we could to give a good balance of form and function, we did not want it looking like an F1 car from the 60s.

Our goals for this test were:

The production mounts will be made from CNC'd 6061-T6 aluminum, but for this test we simply water jet some parts of the same shape and thickness.  We designed three different height mounts for the front.  These prototype parts were installed onto a car at our shop to confirm fitment and position.  It met our expectations so we called our Ride&Handling Engineer, David Thilenius and headed to Spring Mountain.

Dave ran a total of 12 sessions and covered 93.5 miles on track. We tested on Spring Mountain's West 1.5 mile course. While not a particularly fast track, we did have at least one good 100+mph corner in which to judge the wings.  Since this was our first test of these wings, we felt it would be prudent to run at lower speeds to confirm the aero balance.  Not that we were concerned about our driver's safety!.  8^) 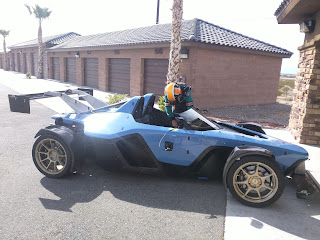 Our wing mounts have fixed Angle of Attack positions that can easily be changed.  We tested every wing configuration and landed on a good setting.  We could not make the handling of the car dangerous. (We consider a tendency to oversteer a dangerous situation). The wings definitely helped to plant the car in the faster sections of the track and raised overall grip levels.  We hit tops speeds of 115mph and lateral acceleration of 1.5gs.

Watch our video below.

Our mounts did appear to be plenty strong and stable so we have signed off on the design. We tested the different height positions for the front wing and we found that our lowest proposed position was just a bit too low and saw some minor scraping of the leading edge of the end plate. We put on different mounts that raised the wing 1.5" from the ground and never saw another issue, this will be our "track" mount going forward. We will also offer another mount that raises the wing 1.5" further from this position in case someone wants to run the front wing on the street.


We also did some testing with an AiM Smarty Cam and some really high tech pieces of string to see what the air flow was doing around various parts of the car. We were happy to see that the strings for the most part behaved how we had expected and showed good air flow going into the radiator ducts and engine oil cooler.  Integrating the SmartyCam into the Drakan was easy since it is prewired for adding it.  We are big believers in using the data and video to improve driving on track and monitoring your car.

Overall it was a good test and we think Drakan customers will appreciate the performance of this upgrade.  The balance is safe and adds enough performance to make our gentleman racer clients feel even more confident on track.  Of course we know that it also looks superbly aggressive - and that never hurts!  Our next step is to head back to SMMR and test on one of their faster configuration and our man, Dave is ready - as soon as he gets back from racing at the Nurburgring.

Keep updated with the lastest projects and product development happening within the Sector111 labs.

Promote Your Page Too